Ole’ Doc Roony is a Tortun Druid from some hidden circle or somethin’ in the swamps of Letona. He was kicked from the Druid circle after he was caught experimentin’ on ‘imself with forbidden alchemy-- particularly takin’ a likin’ to the local fungi colonies-- and he did so due to the circle’s lack of action to protect the peaceful fauna. He is wildly passionate about combinin’ his magic with science knowledge to better protect ‘imself and the swamplands. Roony loves nature with his whole heart, he does and is quite the wise n’ down-to-earth feller as well, which of course, likely came from his excessive experimentation with mushrooms. He soon came across a Plodtrodder tryin’ to catch some Glow Hopper families for supper; He intervened with a combination of magical restraints and alchemical concoctions that pacified the sucker without killin’ it. Roony noticed an injured Trapper was lyin’ behind the Glow Hoppers in the shallow muck and healed her up quick. She took a likin’ to his skills and asked him to come back to the Lodge with her after makin’ sure the Glow Hoppers were okay and all, which is how he ended up becomin a Trapper and earnin’ the nickname “Doc.” When he’s not helpin’ take on a creature or healin’ anyone, he’s always fixin’ up some of his famous Roonshine to boost morale, which will make ye’ blinder than a mole in a mud pool if yer not careful.

The model comes in multiple pieces that can be glued together as well as the stat block provided in physical form.

Please feel free to contact me if you have any questions. This model design and the digital render is by the creator at The Dragon Trapper's Lodge and part of the Swamps of Letona May 2021 Release, who can be found at https://www.patreon.com/dragontrapperslodge

I got this little guy for an npc and had a lot of fun painting him! Lots of great detail, even at the 25mm scale, and the little fungus strands are sturdier than they appear. Basically no clean up, and he arrived safely packaged! Blurry photo for reference! 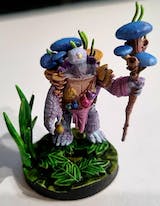